Generating History: the Industrious Past of Chaudière Falls

Portage Power > All  > Blog  > Generating History: the Industrious Past of Chaudière Falls 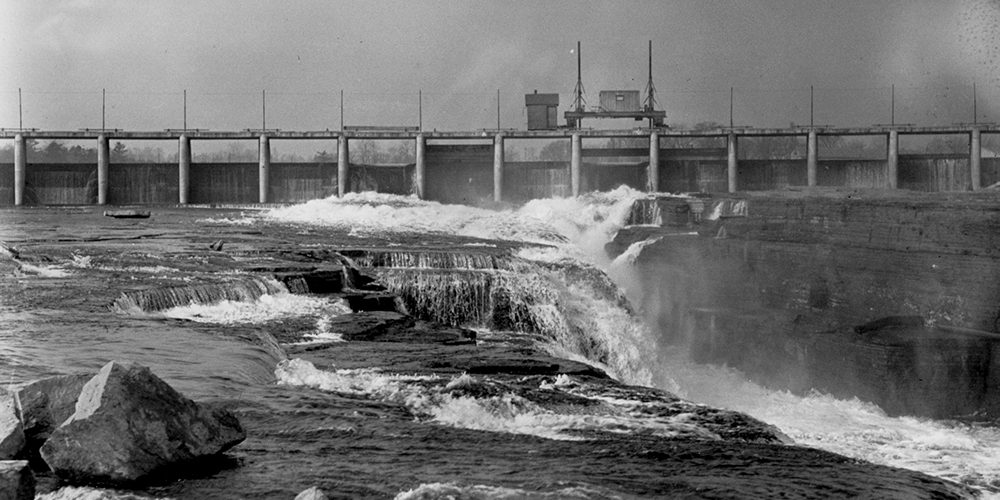 Generating History: the Industrious Past of Chaudière Falls

One of the men at the forefront of the lumber boom in Ottawa was John Rudolphus Booth, Canadian lumber king and railroad baron. Booth was at times referred to as the Chaudière Carnegie for his expansive industry in the area. Booth began by opening a successful shingle factory, accumulating enough money to lease, and later buy, a small sawmill in Hull near the Chaudière Falls.

Ottawa’s industrial past has a firm place at Chaudière Falls on both the Ottawa and Hull sides of the river. The decline of the fur trade along the Ottawa River in the 1800s was countered by the river valley’s flourishing forest industry. World events quickly eliminated any competition providing squared timber to Great Britain, putting the timber of the Ottawa Valley in high demand. The many wars Great Britain was facing during this period had a direct impact on its trade; first with the American Revolution cutting off their supply of timber from New England, and then as a result of their ongoing war with France. While they had traditionally relied on trade with the Baltic region of Europe, Napoleon imposed an economic blockade that limited Anglo-Baltic timber trade severely. Great Britain was left searching for an alternative source of timber; the Ottawa Valley not only possessed great white pine forests, but boasted the added advantage of being accessible by way of the St. Lawrence River.

As market demands changed, J.R. Booth adapted quickly. With the forests of New England being increasingly depleted, the wood demands of the American market began to compete with the British requirements. For the most part, the Americans wanted sawn lumber, and as a result the squared timber market along the Ottawa River valley began to decline. While squared timber was a relatively small-scale operation, the production of sawn lumber required the development of sawmills. J.R. Booth established his own lumber company, serving the American market, and in 1859 tendered successfully for a contract to supply lumber and timber for the new Parliament Buildings. Booth continued to expand his mill, and it quickly became the largest operation of its kind in the world.

Between 1878 and 1892, Booth built the two stone buildings still standing on the northwest side of Chaudière Island. These two-storey limestone buildings have served various purposes over the years. The building furthest west, Powerhouse #3 originally served as a machine shop and after the fire was re-purposed first as a pulp plant and later a power plant. The other building, sitting adjacent to the powerhouse, is sometimes referred to as the Carpenter Shop or the Box Shop – both accurate descriptions of its role and long history. The Box Shop was originally designed to serve as a power plant for generating electricity to illuminate the job site at night and to supply energy to the adjacent board mill. It has been re-purposed many times to serve varying uses including a carpentry workshop, a shingle mill, a pallet and platform factory and of course, a box shop.

Technological advancements were made in order to contend with the higher demand and pace needed to meet that demand. The mills began to employ innovations in steam power and water wheels, leading the way to electric generation. The resulting increase in production was staggering; in 1858, the Ottawa region produced between 20 and 25 million board feet. By 1871, this number had risen to between 236 and 260 million board feet.

At the beginning of the 20th century, the sawmills began to move north as the southern areas became deforested; this, and the Great Fire, resulted in a shift in industry within the Ottawa area. Those industrious lumber barons in Booth and E.B. Eddy rebuilt their factories but shifted from lumber to pulp and paper, ushering in a new era of industry on Chaudière Island. Pulp and paper continued to be a profitable enterprise throughout the 20th century and in 1946 the E.B. Eddy Company acquired the Booth buildings, later selling all of the property to Domtar in 1998. In 2012, Hydro Ottawa purchased these and other assets from Domtar, and are investigating how to preserve and repurpose these historic structures.