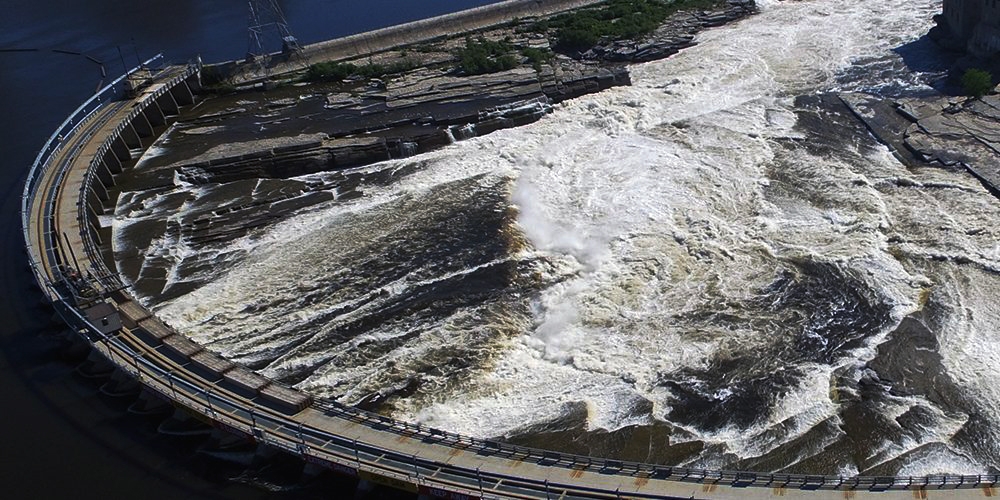 The Ring Dam at Chaudière Falls is an essential part of the hydroelectric operations there – and has been for over 100 years. Built between 1907 and 1909, the dam is entering its 109th year, having been put into operation in 1910 with the aim of regulating the flow of water in the Ottawa River and maintaining upstream water levels between Ottawa and Arnprior.

Throughout the 1800s, prior to the construction of the Ring Dam, a number of dikes and small dams were built by owners of various industries on the shores and islands around the falls. These small structures allowed them to force the water towards their equipment and turbines; particularly in the fall and winter when the current slowed far below what was seen in spring. This, of course, resulted in many disputes among their users, and with the arrival of electricity, the competition became even fiercer. In 1905 owners and renters united to build a single dam to serve them all, and in 1907 the governments of Ontario and Quebec reached an agreement to share the rights for the hydroelectric potential of Chaudière dam, splitting the cost, power generation, maintenance and operation equally. This made the Chaudière Ring Dam the first hydroelectric dam on the Ottawa River. With hydroelectricity accounting for 61% of Canada’s electricity, the Ottawa River and the Ring Dam at Chaudière Falls have a significant place in history. The Ottawa River is one of three rivers nationally that played a crucial role in the early development of hydroelectricity in Canada. 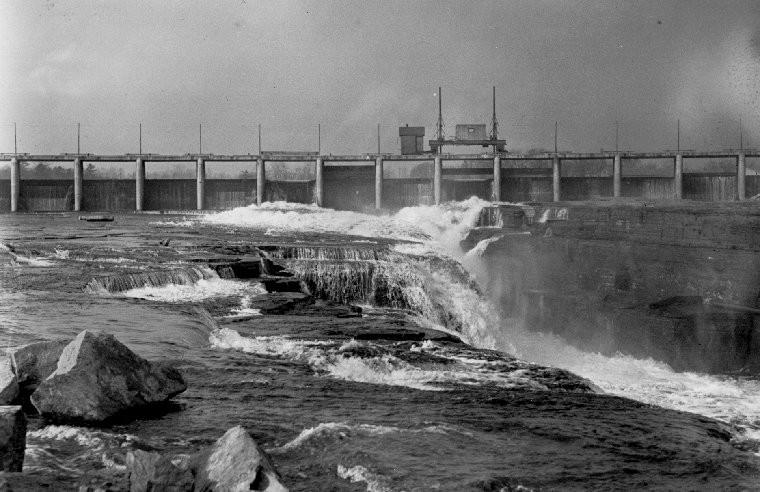 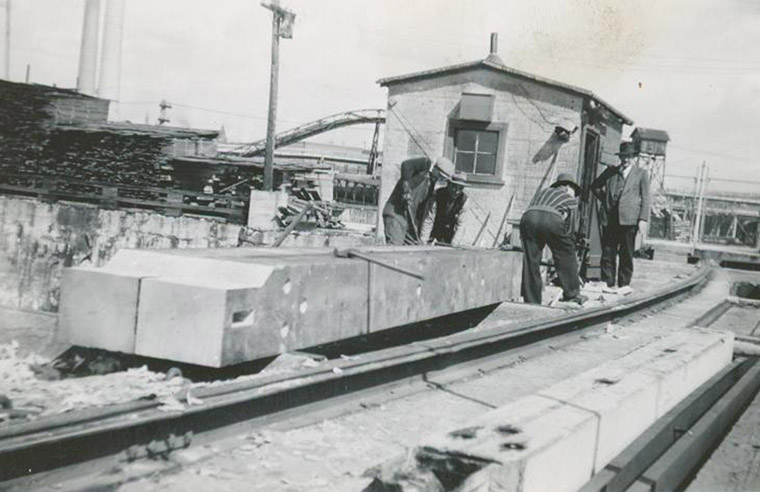 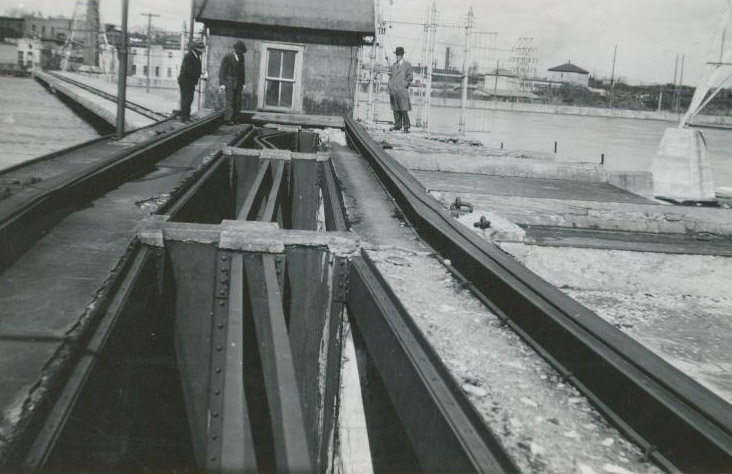 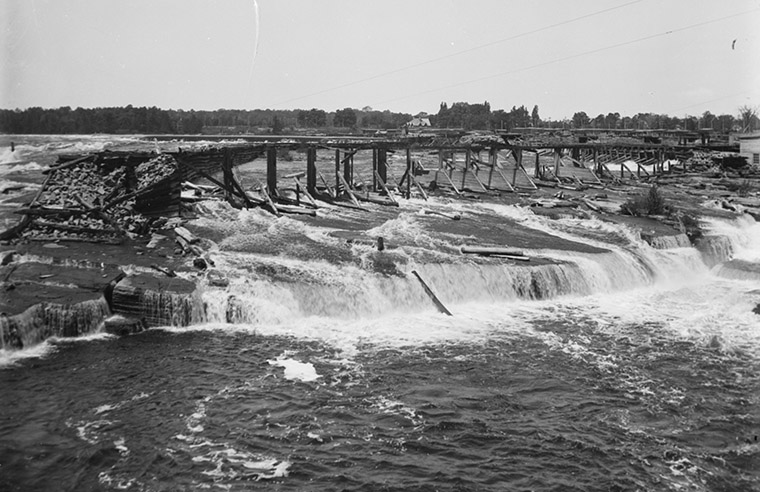 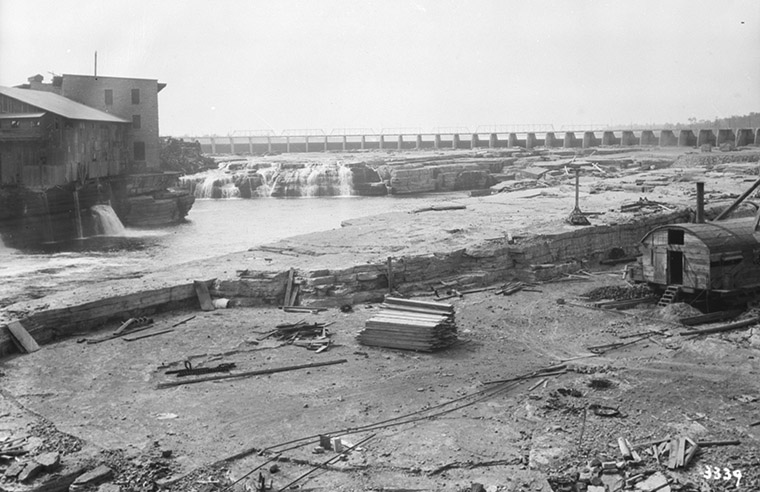 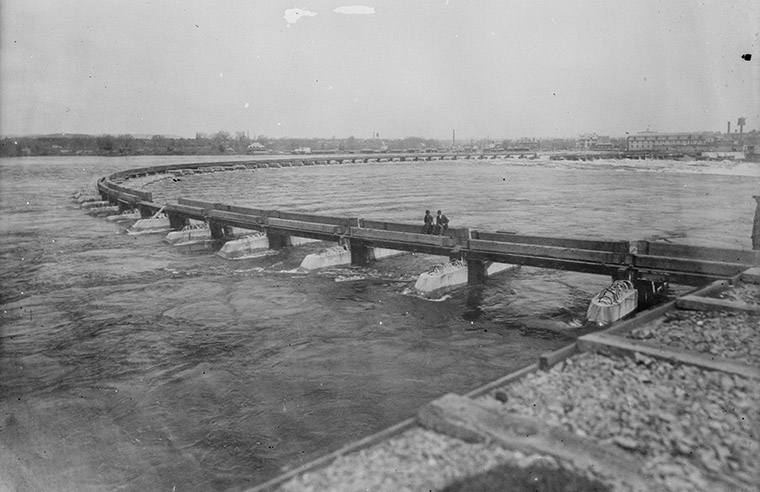 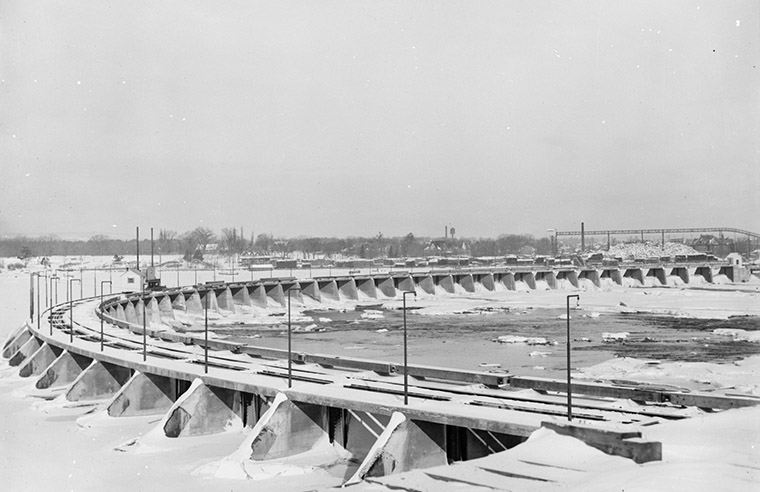 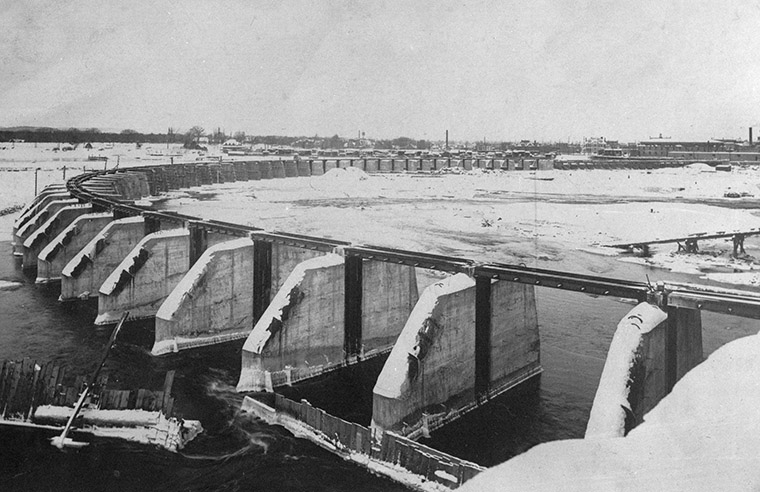 The original 1907 agreement between Ontario and Quebec saw shared water rights but also shared maintenance and operations of the dam. This meant that when the dam first opened, both governments had operators monitoring the dam. While the original split of ownership was equal, various sales and acquisition shifted ownership over the years. In 2016, Hydro Ottawa held 67% interest in the dam and announced that they had entered a purchase and sale agreement with Hydro Quebec to acquire the remaining 33% interest in the Ring Dam. The dam is used only for regulatory purposes and does not create a reservoir of water. The amount of water that spills above the stop logs is dictated by the river flow and varies from zero at low-water periods to as much as 5,500 cubic metres per second in spring. Because the dam is only used to regulate and not store water, the construction of the dam did not dramatically change the shoreline of the lakes upstream. 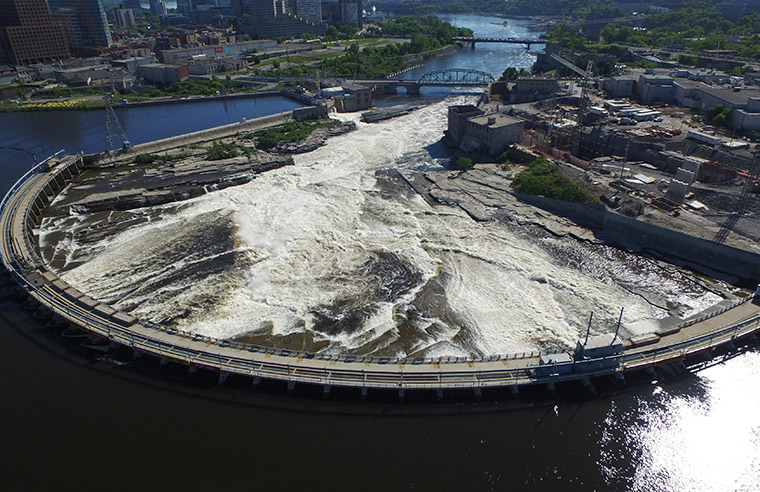 The dam is 400 metres long and forms an arc between two of the power generating stations; the arc shape mirrors the shape of the falls, named Chaudière – “cauldron” or “kettle” – by early French explorers for its shape which they translated from the Anishinaabe name for the falls which was “asticou” or “the boiler”. The Ring Dam has 50 sluiceways or passages with slots that hold large, squared, timber stop logs. Operators insert and remove the stop logs into the sluiceway using three electric hoists on the deck above in order to keep the upstream water level as constant as possible. This method of operation has been used since the dam opened in 1910 and continues to this day. The Ring Dam has been monitored and continuously staffed 24 hours a day, 365 days a year since it went into service in 1910. That’s almost 94,000 hours of continuous operation! While the dam itself is not accessible for safety reasons, you can visit the new park area at Chaudière Falls to observe the beauty and power of the Ottawa River as it flows through the historical Ring Dam. 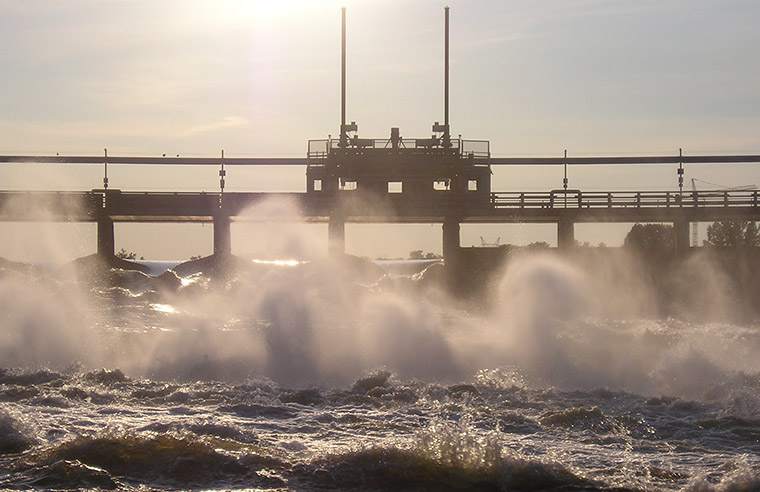 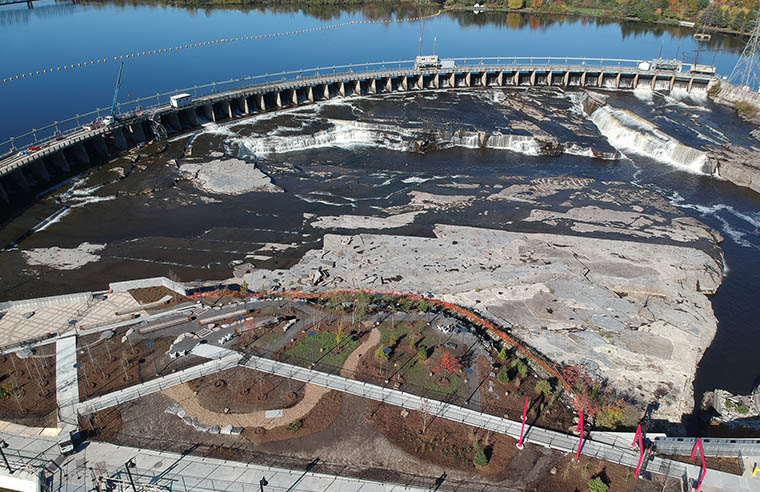 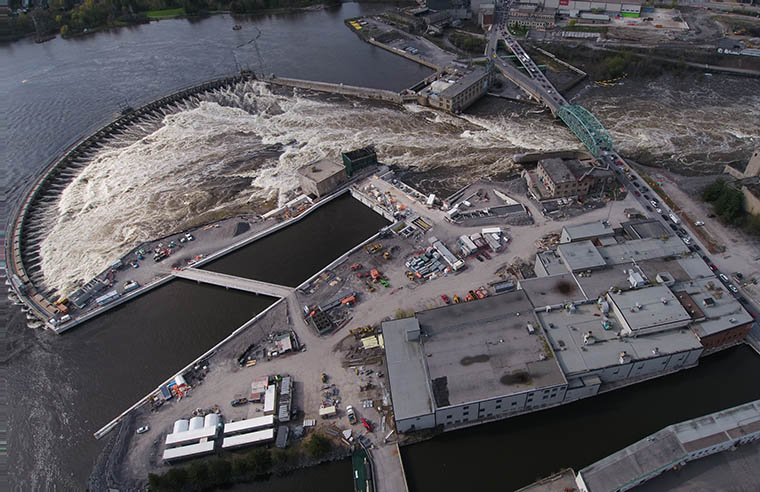 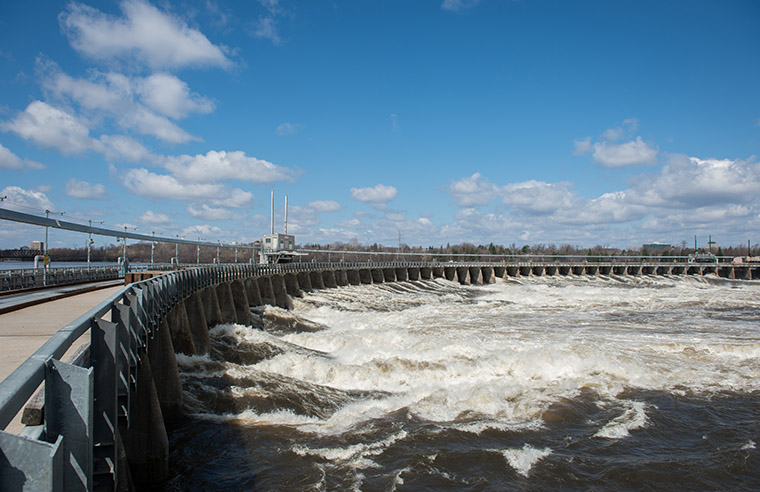